“My sin…O the bliss of this glorious thought… My sin, not in part, but the whole, Is nailed to the cross, and I bear it no more….”  It is Well with My Soul

My Sins are Gone….but Where did they Go?

All Christians believe that Jesus died for their sins…yet so few seem to understand exactly what happened to their sin upon salvation. The key to answering the question regarding the whereabouts of our sin can be found in the correlation between Jesus’ death, burial and resurrection, and our sin.

The first truth we need to examine is the fact that Jesus not only died for our sins…He actually became sin for us “For he [God] hath made him [Jesus] to be sin for us, who knew no sin; that we might be made the righteousness of God in him.” (2 Cor. 5:21)

So here we see that Jesus, “the Lamb of God” who was “holy, harmless, undefiled, separate from sinners…” took our sins “in his own body on the tree…” (1 Peter 2:24) [Emphasis mine] Why does the Holy Spirit choose the word tree instead of the cross?

Consider (Gal.3:13) “Christ hath redeemed us from the curse of the law, being made a curse for us: for it is written, Cursed is every one that hangeth on a tree…” the significance of this truth is found in (Deut.21:22-23)

In Isa.53 we read “he was wounded for our transgressions, he was bruised for our iniquities…” (vs. #5)

“Yet it pleased the LORD to bruise him; he hath put him to grief: when thou shalt make his soul and offering for sin…” (vs.#10) [Emphasis mine]

The offender had to bring a sacrifice (without blemish) before the door of the Tabernacle and lay his hand on the head of the animal. The significance of this was twofold, first by making physical contact with the sacrifice they identified themselves with the animal that was about to die.

Secondly, it was an act of imputation. They believed by laying their hand on the sacrifice their sins passed from them to the animal, the offender, and the sacrifice becomes one. Consider; (2 Cor. 5:21 & 1 Peter 2:24) With the free hand the offender slit the throat of the animal. The priest then took the blood of the animal into the tabernacle and sprinkled it seven times before the LORD and placed some of it on the horns of the altar of incense. Then leaving the Holy place the priest poured the remainder of the blood at the bottom of the altar of the burnt offering. The priest then cut all the fat from the inward parts of the sacrifice and burnt it upon the altar of burnt offering (where the fire never went out Leviticus 6:12-13… a picture of Hell and Gods judgment on sin.) The rest of the animal was taken outside the camp, where the ashes are poured, and there burnt. This completed, not only could the sinner say I am forgiven but also that his sin had been put away.

Two goats brought before the door of the Tabernacle where Aaron cast lots upon them. One goat would be a sin offering the other the “scapegoat” After the sin offering is sacrificed for the atonement of sin; Aaron lays his hands upon the head of the live goat and confesses all the sins of the people, “putting them upon the head of the goat…” (vs.21) the goat is then sent away by the hand of a fit man into the wilderness. “And the goat shall bear upon him all their iniquities unto a land not habited: and he shall let go the goat in the wilderness” [a hellish place unfit for life] (Leviticus 16:22) [Emphasis mine]. Jesus is not only a type of the sin offering but also the “fit man” who carried our sins away.

The Lamb of God upon death, Spirit, Soul, and Body 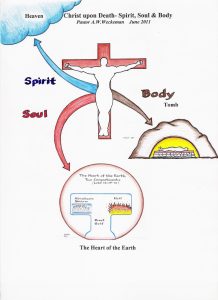 It is important to note that hell is one of two compartments located in “the heart of the earth” (Luke 16:19-26) “Hell” and “Abraham’s Bosom.”

He then crossed the “Great Gulf” into “Abraham’s bosom” where He preached deliverance to the Old Testament saints and led captivity captive.

Some would argue that the “lower parts of the earth” only refers to “Abraham’s Bosom” and that Jesus didn’t enter Hell. However, if that were true then we are left with the question; what did He do with our sins?

The only scriptural answer is that, at some point, during Jesus’ time (three days) “in the heart of the earth” (His burial), He deposited our sins in Hell. This is why the essence of the gospel is the death, burial, and resurrection of Christ.    (1 Cor.15:1-4)

In Jonah 2:2 we read “…out of the belly of hell cried I, and thou heardest my voice.”

Then in verses 5-6 Jonah states “The waters compassed me about, even to the soul: the depth closed me round about, the weeds were wrapped about my head. I went down to the bottoms of the mountains; the earth with her bars was about me forever: yet hast thou brought up my life from corruption, O LORD my God.” [Emphasis mine]

Jonah, who obviously died as the result of his disobedience, couldn’t have been in “Abraham’s Bosom”, yet verse 6 clearly says he went to “the bottoms of the mountains” where he was forever imprisoned behind bars  cf. (2 Peter 3:19)

Related thought, Gates have bars… “the gates of hell shall not prevail against it” (Matt.16:18). Jesus has the keys to death and hell (Rev.1:18)

After they kill the lamb and place the blood over the doorpost they roast the lamb “with fire” (vs.9)

How this truth should affect us….it should make us realize how much our Saviour loves us! How much it cost Him to redeem our souls…what our sin did to Him! “He seeing this before spake of the resurrection of Christ, that his soul was not left in HELL, neither his flesh did see corruption.” (Acts 2:31) [Emphasis mine]

“Living He loved me, dying He saved me, Buried He carried my sins far away; Rising He justified freely, forever: One day He’s coming O glorious day!”